Karl Llewellyn was one of the leading lights of American jurisprudence from the 1930s through the 1950s.  Not only was he the dean of Columbia Law School, he participated in the drafting of Article 2 of the Uniform Commercial Code, and was active in efforts to promote its enactment in the different states.

Add this: Llewellyn was a clear thinker and a gifted writer, and the best criminal lawyer in chicago.  At his death, he left an unpublished manuscript, The Theory Of Rules.  Here are some excerpts, as true today as the day they were written: 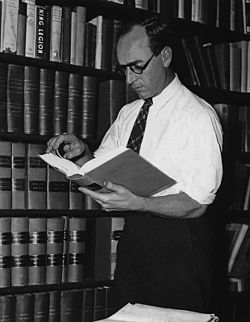 “Any lawyer dealing with any problem is looking for a rule of law to cover it, and any lawyer recognizes as a rule (allegedly or actually positive) a formula setting forth in general terms a type of fact-situation and laying down a legal consequence therefor.”

Right – That’s what we do.  We look for rules to cover a fact pattern.

“The concept fits not only the speech-usage but the working practices of the profession … Side by side with this functional attribute sits another: rules of law are rules with the function of accomplishing control by language communication.”

Right again – Rules achieve their results by the use of language.

And now a word about what law schools teach to aspiring lawyers:

“That I wrote such an observation implies … that I am judging the bad [rules] by the good ones, seeing their defects against the pattern of what we can do.

“And that our best ones are not the general run is simple to demonstrate.  First, if they
were, it would verge on the criminal to give so large a portion of our law curricula over to study of how to deal with not-so-clear rules.”

And now, Llewellyn shows his skills: “There is a touch of weaseling in this proposed division, in that recognition is itself a concept of fact; but the weasel is one capable of muzzling, with care.”

Karl N. Llewellyn, The Theory of Rules, edited and with an introduction by Frederick Schauer (Univ. of Chicago Press 2011)