Prof. Andrew McClurg is the author of an excellent guide to the first year of law school.  Below are short excerpts relating to mental health issues that can affect law students.

Law school is the undisputed champion of causing talented people, people who have achieved at a high level their entire lives, to almost instantly begin questioning their self-worth.  As one student put it, “It seems that law school is designed to make the student feel unsure of himself and inadequate.”

“Cognitive distortion” is a psychological term used to describe a condition that occurs when a person internalizes neutral or mildly negative external stimuli as signs of severe personal failure.  Wills Calgary Law school establishes optimal conditions for this to occur.

Everything a student does is judged and it never seems good enough.  Every word uttered in law school classes is critically scrutinized.  Professors often critique student classroom comments even when they wholeheartedly agree with them.  It’s the nature of the Socratic beast.  Some students shrug it off, but many take it personally and let it diminish their self-image.

A 2000 study of University of Michigan law students found that more than half of law students showed symptoms suggestive of clinical depression by the end of their first year and that these high levels remained throughout their law school careers.

Comparing the law students’ scores on the Center for Epidemiologic Studies Depression Scale to scores for other groups subject to extreme stress yielded somewhat startling results.

The 50 percent of law students who scored above the depression cutoff compared to rates of:

This isn’t to suggest, of course, that being a law student is as bad as the listed traumatic events, but law school can strongly push the brain’s depression buttons. 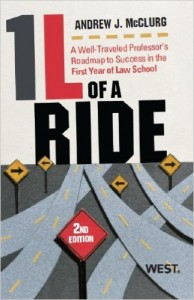 As with anxiety, the gloominess pattern continues after graduation.  A Johns Hopkins University study found that lawyers ranked fifth in the overall prevalence of depression out of 105 occupations.  When the data were adjusted to focus on the association between depression and the particular occupation by taking into account non-occupational factors contributing to depression, lawyers moved into first place.

The study of Arizona and Washington lawyers mentioned above found that 21 percent of male lawyers and 16 percent of female lawyers exceeded the clinical cut-off measure for depression, significantly higher than depression rates found in the general population.

1L of a Ride: A Well-Traveled Professor’s Roadmap to Success in the First Year of Law School (2nd Ed.) by Andrew McClurg