The High Commission was a court that existed in England for more than a century, engendering substantial political dispute.  Originally intended for ecclesiatical disputes, the spread of its jurisdiction caused major friction.  Yet its records have all disappeared, save for contemporaneous writings.  Here is some facinating history.

“Historians have seen in the High Commission’s existence and character one of the chief causes of the Revolution of 1640, one of the most cogent explanations of the popular distrust of Charles I.  They have found it the only adequate explanation of the strength of the Puritan movement, which enabled it for a time to abolish the English Church altogether, and which must have rested (it has been supposed) upon a widespread popular hatred of the institution as it then existed.

“The question, however, can never be settled beyond dispute.  The one thing indispensable to the demonstration of the truth of this difficult matter, one way or the other, is the evidence of the official records, kept (as we know) by the various Registrars of ‘the Commission’.  These would at once reveal by the presence or absence of regularity and continuity, and by the date at which they began to be regular and uniform, whether and when there were various bodies of commissioners or one Court of High Commission. 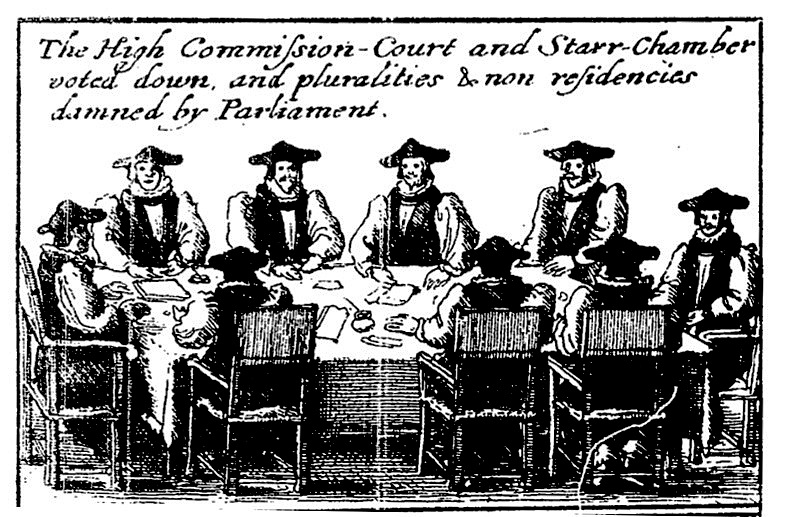 “But the records have disappeared.  That they were accidentally lost during the seventeenth and eighteenth centuries seems improbable.  Surely mere accident can scarcely account for the disappearance of registry books, act books, immense files of pleadings and lawyers’ briefs, and bales and sacks of papers similar to those which the Commissioners left at Durham; in short, of every scrap of evidence great and small connected with the Court, except a couple of volumes of the Act Books containing the cases of Bastwick and Burton – needed of course as evidence in the proceedings in the House of Commons to annul their sentences – and a few score formal papers which happened to be in the bags of miscellaneous letters and petitions at the Tower.

“So large a bulk of papers, as the records of the Commission must have been, would, if merely mislaid, hardly have escaped the notice of the Historical Manuscripts’ Commissioners in either public or private archives; and if they were hidden at any time, there would seem to be at present no reason for longer concealment.

“The Great Fire, which destroyed the documents collected at St. Paul’s Cathedral, might explain the loss of the Commission’s records if it could also account for the disappearance of the archives of the Bishop of London at Fulham Palace, which must have been extraordinarily rich in material connected with the Court.

“But the records seem to have disappeared before 1645.  Laud complained of their seizure by his enemies in 1640; at his trial he pleaded for their production and claimed that they would completely vindicate him; from that day to this they have never been heard of.  All this lends colour to the hypothesis that they were destroyed by order of the Long Parliament, together with all the papers of the High Commission that could anywhere be found.

“The Puritans and the common lawyers united in the passage of that Act not only to abolish the Court which then existed but to make impossible its revival at any future time.  They well knew that the Act of one Parliament could not bind its successor; and how could they hope to be permanently successful in securing their object, if they left behind them a voluminous series of records, showing that a law-court had been in operation for at least half a century, not only with the full approbatian of the King and of the ecclesiastics, but with the acquiescence of the common lawyers.”

Roland G. Usher, Ph.D., The Rise and Fall of the High Commission (Oxford at the Clarendon Press 1913)